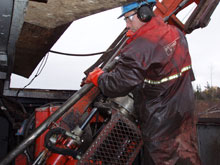 Southwards, the metasediments are overlain by a sequence of tholeiitic basalts which in turn are succeeded by a sequence of ultramafics belonging to the Stoughton-Roquemaure Assemblage. This sequence of rocks, which underlies more than a third of the Guibord property, dips south from 45 degrees to vertical but irregularly shaped segments of ultramafic rock engulfed by tholeiitic basalts suggest folding resulting from shearing parallel to strike.

The ultramafics are overlain by a sequence comprising mainly iron-rich tholeiitic basalts belonging to the Kinojevis Assemblage. These rocks occupy the southern third of the property. Syenitic dikes and lamprophyres are common throughout the basaltic and ultramafic sequences in association with increased levels of pyrite and anomalous gold values. The contact between the ultramafic and iron-rich basalt sequences is a shear zone interpreted to be a branch fault of the DPFZ that extends through the length of the property, a distance of over 1.7 km. Past drilling has shown that zones containing auriferous quartz and carbonate veins are concentrated in close association with this contact.

Magnetic surveys on the Guibord property indicate that the southwest corner of the property is underlain by rocks with more subdued magnetic susceptibility and the contact of this unit with the iron-rich tholeiites is abrupt. This contact may also be a branch of the DPFZ, although it has not been tested by drilling.

Historical exploration on the property has been focused on the North Zone which lies immediately south of the contact between the Porcupine metasediments and the Stoughton-Roquemaure Assemblage and a series of gold-bearing alteration zones known as the Shear Zone, South Zone and Quartz Vein Zone or Quartz Carbonate Vein Zone (QCVZ) which occur in the shear/contact zone between the ultramafic and Kinojevis assemblage.

The North zone was initially identified in 1964. Drillhole G-1 intersected 8.22 grams of gold per tonne over 2.13 metres, including 13.7 grams of gold per tonne over 1.22 m containing pyrite and arsenopyrite, adjacent to a mica-rich lamprophyre dike. True widths for this intersection cannot be estimated. This intersection was not confirmed by later drilling. One drillhole, GN-15, did however, encounter bleached, altered mafic volcanic rocks containing arsenopyrite, indicative of an extensive alteration zone which has not been completely delineated. In drill hole GN-16, zones containing up to 40% sulphide were found adjacent to the basalt-metasediment contact.

The Quartz Vein Zone or QCVZ including the section previously known as the Shear Zone was defined on the basis of a pyrite enriched quartz-carbonate vein complex intersected in drillhole GN-08 from 92.7 to 104.7m depth. One sample from this vein complex returned an assay of 47.01 g Au/t over 0.91 m. True width for this intersection is likely about 85% of intersection length.

Plato’s 2005 diamond drill program on the property consisted of 15 drillholes aggregating 3,192m of drilling. The drill program targeted the Quartz-Carbonate Vein Zone (QCVZ) and the South Zone and several IP anomalies defined by IP surveys completed by Plato in 1997.

The 2005 program was encouraging and successful in expanding and improving our understanding of both the QCVZ and the South Zones. The program showed that the QCVZ contains significant widths of semi-continuous quartz-carbonate vein complexes and sulphide mineralization with encouraging gold values. The zone can be reasonably projected over a strike length in excess of 450m and likely in excess of 800m and true widths are up to nearly 70 m. Drillholes GP-01 and GP-12 were two of the best holes in the program. GP-01 returned an average grade of 2.74 g Au/t from 178.0 to 183.0m over 5 m including one, 1 metre sample grading 6.6 g Au/t and two additional samples grading more than 2.6 g Au/t. Drillhole GP-12 drilled 150 m east of GP-01 cut the same zone. The 5 metre interval from 137.0 to 142.0 m averaged 2.40 g Au/t and contained a best sample of 5.25 g Au/t. True widths for these intersection are likely about 85% of intersection lengths.

The South Zone is now viewed as a composite zone consisting of a number of distinct lenses and zones of mineralization that are situated in the iron-rich basalts that form the hanging wall above the basalt-ultramafic contact. There appears to be at least three main zones and lenses of mineralization that strike and dip roughly parallel to the volcanic stratigraphy, the basalt-ultramafic contact and syenite dykes. The best 2005 intersection for the South Zone was in GP-01. Immediately under the overburden-bedrock interface GP-01 cut a wide (26.6m) intersection of low grade mineralization. The highest grading sample in this interval returned an average grade of 1.87 g Au/t. The entire 26.6m interval had a composite grade of 0.77 g Au/t. Again this zone is the same one as intersected historical drillholes GN-12 and GN-13 and its configuration is not well understood. Consequently intersections widths may be considerably wider than true widths.

The drilling of IP anomalies produced mixed results with possible causative sources due to low grade mineralization identified in two holes out of four holes drilled to test these targets. GP-04 and GP-05 further tested the extensive alteration zone initially encountered in historic drillhole GN-15. Extensive alteration possibly associated with intrusives and low gold values was intersected. This zone is likely more than 100m wide but is still only partially delineated and requires more drilling and geochemical assessment.

Plato believes that its Guibord property is well situated. An adjacent property, Hislop East hosts the former gold producer Kelore Mine. The Black Fox project, on the site of the former Glimmer gold mine is located on strike 5 km northwest of Plato’s property. The Ross Mine which produced over one million ounces of gold is located 3 km south of Plato’s Guibord Property.

We are encouraged by results for the QCVZ and a drilling program targeting this zone is proposed for 2007-2008.

In June 2009, Plato renamed the 16 contiguous Guibord claims the Silver Fox Project with plans for additional work in the region.

Plato holds 50% interest in the Guibord property with the remaining 50% held by Osisko Mining Inc.