It is underlain predominantly by an alternating series of basalts belonging to the Kinojevis Assemblage. These basalts occur in several textural forms including massive flows, pillowed flows, flow top and pillow breccias and hyaloclastite. Some sections of the property are dominated by areas principally underlain by iron-rich tholeiites or magnesium-rich tholeiites; in other areas basalts alternate in type from flow to flow. 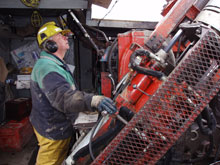 Occasional beds of dacites/rhyolite and interflow graphitic sediments occur between basalt flows. One main felsic volcanic unit occurs in a unit up to 90 metres (true thickness) wide and extends over six kilometres through the length of the property. Multiple felsic volcanic horizons appear to be present in the western part of the property. These same horizons are exposed in the southeast corner of Harker Township and are known to host weak gold mineralization. Rare narrow syenite or quartz feldspar dikes also occur. These are most often associated with fault zones or faulted/sheared contacts.

Plato, in 1997, 2004 and 2005 conducted induced polarization to define exploration targets on its property. These surveys were conducted by Quantec Consulting Inc. and Abitibi Geophysics Inc. and defined a large number of anomalies.

MP-01 returned 1.86 g Au/t over 1.0m from 185.3 to 186.3m. This intersection appears to be the extension of a zone intersected by historical Hemlo drillhole GH95-105, located 200 m east of MP-01 that closely correlates with an IP anomaly. These two intersections are interpreted to represent a splay fault subsidiary to the DPFZ. This IP anomaly is completely open to the west.

MP-10 located in the northwest corner of the Property adjacent to the DPFZ, returned 2.4 g Au/t over 1.0m from 211.8 to 212.8m and 5.14 g Au/t over 1.0m from 222.3 to 223.2m. For these intersections true widths are again probably about 85% of true widths. MP-10 also cut a zone of brecciated quartz carbonate veining enveloped by strongly sericitic and strongly pyrite mineralized altered basalt from 269.1 to 274.8m. This zone returned trace gold indicative of weak gold enrichment. A similar alteration zone was intersected in drillhole MP-11 drilled 100m east of MP-10. In MP-11 the zone extended from 331.2 to 335.5m but again gold values were low.

Drillholes MP-02, 03, 07 and 09 targeted a series of IP anomalies coincident with the southern contact of a regional scale magnetic low that crosses through the north central part of the Property. These holes all encountered graphitic sediments within extensive intervals of altered basalt. We interpret the sedimentary-altered basalt sequence as defining the boundary of a distinct volcanic terrane characterized by a regional scale change in lithology and this boundary is likely a fault zone. Despite extensive alteration, including arsenic and tungsten anomalies only one of these drillholes returned an assay approaching 1.0g Au/t. MP-07 intersected 0.96 g Au/t over 0.5m from 91.5 to 92.0m. We think the alteration patterns are similar, albeit less intense to those exhibited by similar mafic rocks associated with the Lightning Zone at the Holloway Mine.

Preparation work is underway to get gold production at the Holloway-Holt project re-started. The Holt mine is located on a series of shear zones within the Kinojevis Assemblage. The Holloway mine mined ore closely associated with a geological contact and Destor Porcupine Fault Zone (“DPFZ”) located between the Kinojevis Assemblage and the Stoughton-Roquemaure Assemblage and associated ancillary structures.

For the Plato property, more drill targets defined by untested IP anomalies are known on the Property and further drill testing is proposed.