The Lolita Property is located in the Province of Santa Cruz in southern Argentina (see location map). 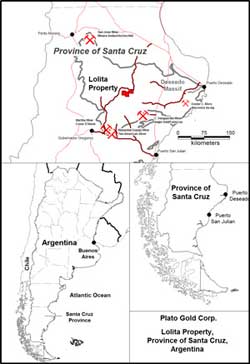 Three precious metal mines are now in production in Santa Cruz and a fourth is now in construction. All of this development has occurred in the past ten years. Lolita was acquired by staking (see map of property 29,904 hectares) based upon a compilation of public data including geology maps and satellite images.

The property is adjacent to a gravel provincial highway and is traversed by numerous local dirt roads joining sheep ranches. These sheep ranches are inactive and with no livestock, and the area is largely uninhabited. The area is semi-arid, treeless and has low topographic relief of plains and low hills (see photo below) with a cool, dry continental climate similar to, but drier than most of the Canadian Praires, for example.

All of the precious mines mentioned above are hosted by Jurassic-aged rocks of the Deseado Massif, the same geological province in which Lolita is located. Lolita falls near the join of four 1:250,000 scale maps produced by the Argentine government (see geology map below). 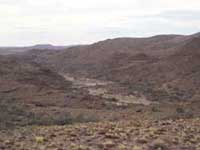 Most of the property is mapped as being underlain by the Bajo Pobre and Chon Aike Formations of Jurassic age. The Chon Aike formation is a felsic volcanic unit of ash-flow tuffs which is host to most of the known precious metal occurrences and mines in the Deseado Massif.

Bajo Pobre is a slightly older formation comprised mainly of intermediate to mafic volcanics with lesser sedimentary/volcanic intercalations. These two formations overlie the Roca Blanca Formation of earliest Jurassic age. The Roca Blanca Formation also hosts precious and base metal mineralization on the property adjoining Lolita to the southeast.

Compilation indicates that vein systems and structures on the adjoining properties generally trend north-westerly with a lesser trend oriented north-easterly. North-westerly trending structures are present in both geological maps and satellite images of the Lolita area. 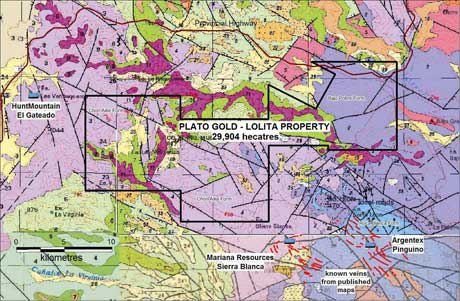 Plato believes these structures are prospective for precious and base metal mineralization similar to those found on the adjoining properties and intends to launch a program of surface work including geological mapping and propecting.