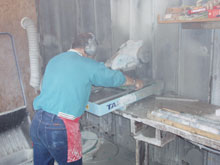 The majority of the Holloway property is underlain by Kinojevis Assemblage iron and magnesium-rich tholeiitic basalts. Both types of basalt occur in several textural forms and occur as massive flows, pillowed flows, hyaloclastite and as flow top and pillow breccias. The iron-rich basalts are located principally in the northern portion of the property.

The northern margin of the property is underlain by DPC Timiskamining-style metasediments consisting of greywackes, iron formation and a probable component of felsic volcanics. The DPC rocks are bounded by Destor-Porcupine faults that strike east-west. The Holloway mine is situated on a northern branch fault, north of the property. A South Branch of the DPFZ cuts through the Holloway property and forms the contact between the DPC metasediments and Kinojevis basalts that underlie all of the Holloway property south of the fault. Structurally underlying the DPC metasediments is a group of basalts and ultramafics that form the host rocks for the Pumphouse zone on Newmont’s Holloway mine property. Data available is incomplete but Plato believes that this zone may project onto the west end of the Holloway property at a vertical depth of about 1.2 kilometres to 1.5 kilometres.

Two main deformation/alteration zones have been sampled by diamond drilling on the Holloway property. These two zones are known as the DPF Horizon and the South Horizon. The DFP Horizon extends along the northern margin of the property near the contact of the Kinojevis mafic volcanics and the metasediments and the South Branch of the DPFZ. This structure may be a first order DPFZ fault or a second order splay that may be the Ghostmount Fault, which hosts the Mattawasaga Zone at the Holt-McDermott mine to the west-southwest of the property. The DFP Horizon is characterized by an extensive width of hematization, up to 5% pyrite, pervasive carbonatization and sericitization of variolitic iron-tholeiitic basalt. Only low gold values have been intersected in drilling, the best being less than 0.5 grams of gold per tonne.

Plato believes there is good potential to locate gold mineralization, likely at depth, on the Holloway property. Based on the fact that Newmont is actively drilling the Ghostmount fault extension east of the Holt-McDermott mine and had previously drilled both on and immediately west of the Holloway property near where this zone is projected, Plato believes that this structure holds the most potential. This DPFZ-related structure, which is likely the eastern extension of the Ghostmount fault, has been cut by several holes on the Holloway property, has returned sporadic significant gold values and has not been tested at depth. As well, the Pumphouse zone and the Lightning vein are all associated with the main DPFZ and occur within one kilometre north of the Holloway property are also of interest as the Pumphouse zone may extend onto the property at a depth of 1.0 to 1.5 kilometres and the Lightning vein may project onto the property at shallower depths.