Lolita Property I, II and III

On November 28, 2007, Plato Gold Corp. reported that the initial work program on the Lolita Property (see Figure 1) in the province of Santa Cruz, Argentina has discovered previously unexplored hydrothermal structures. 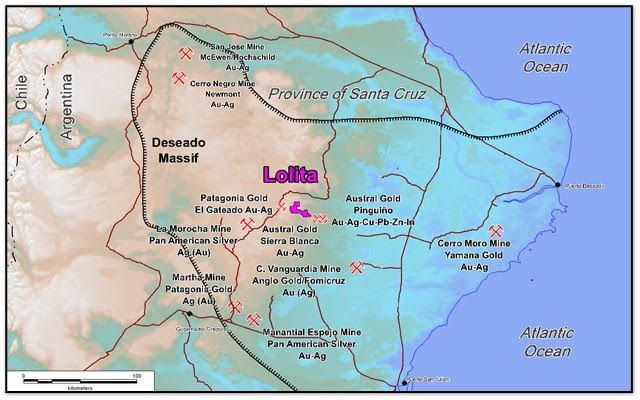 Plato reports that in the south central part of the property, three (3) unreported hydrothermal structures with little or no previous sampling activity have been identified. In some cases these structures identified on the map in Figure 2 as Espalda, Panza and Colita zones form corridors of multiple individual structures over significant widths (see Figure 2).

The Espalda Zone comprises multiple individual breccias zones of several metres in width and up to hundreds of metres in length over an area of 700 metres wide by 800 metres long. These structures contain brecciated felsite with infill of black chalcedonic silica indicating that the exposed level of the hydrothermal system is very shallow suggesting potential within this large target at depth. (see Figure 3)

At the Colita Zone, about three kilometers south of Espalda, silicified and brecciated structures are also present in a corridor of about 150m wide by about 800m long. These structures are similar to Espalda but the silica tends to be brownish with hematite present possibly after oxidized pyrite. At Colita rock samples contain from 82 to 654 ppb of mercury, <5 to 63 ppm antimony and 8 to 42 ppm arsenic. Between Colita and Espalda several individual breccia structures were located with similar geological characteristics including black chalcedony. The longest of these is intermittently exposed in two segments of 380 and 470 metres long respectively, and if it is proven to be continuous could have a length in excess of 1,400 metres.

The Panza Zone is a corridor of structures of hydrothermal breccias containing occasional narrow banded chalcedony veins. Some of the individual breccia structures are in excess of 5m wide and the zone has been traced for 1,600 metres and is open along strike in both directions. The distance between the Panza and Colita zones is 1,400 metres and there are indications they could be connected. The Panza structures contain abundant hematite, jarosite and limonites and locally fresh pyrite is preserved at surface. The sulphides generally occur as fine dissemination in the matrix of hydrothermal breccias with fine grained chalcedony and pervasive silicification. At Panza rock samples contain from 4,943 to 62,879 ppb mercury, 43 to 2,827 ppm arsenic, and <5 to 256 ppm antimony averaging 107 ppm. (see Figure 4)

The Lolita Property is located in a geological metal-rich province hosted by Jurassic-aged rocks of the Deseado Massif. Dr. Lhotka’s fieldwork indicates that the three zones named above are hosted by a felsite unit which is likely part of the Chon Aike or La Matilde Formations. To the south, on the adjacent exploration properties, it is reported that formations deeper in the stratigraphy contain most of the mineralization. Work on Lolita to date suggests that the hydrothermal structures with chalcedonic silica and brecciation represent the shallow levels of an epithermal system. The presence of strong anomalies in mercury, arsenic and in particular antimony suggest that deeper in the hydrothermal system precious metals could be found at Lolita, unlike at surface where they are not present.

In light of the favourable results Dr. Lhotka has recommended that Plato complete the first pass prospecting on the remainder of the Lolita Property and commence more detailed prospecting and rock sampling in the Espalda – Colita – Panza area.

Paul G. Lhotka, Ph.D., P. Geo is responsible for the technical contents of this report. All analyses were done by Alex Stewart (Assayers) Argentina S.A. a certified laboratory. Dr. Lhotka is President of Minera Latina S.A. and a geologist based in Mendoza, Argentina. 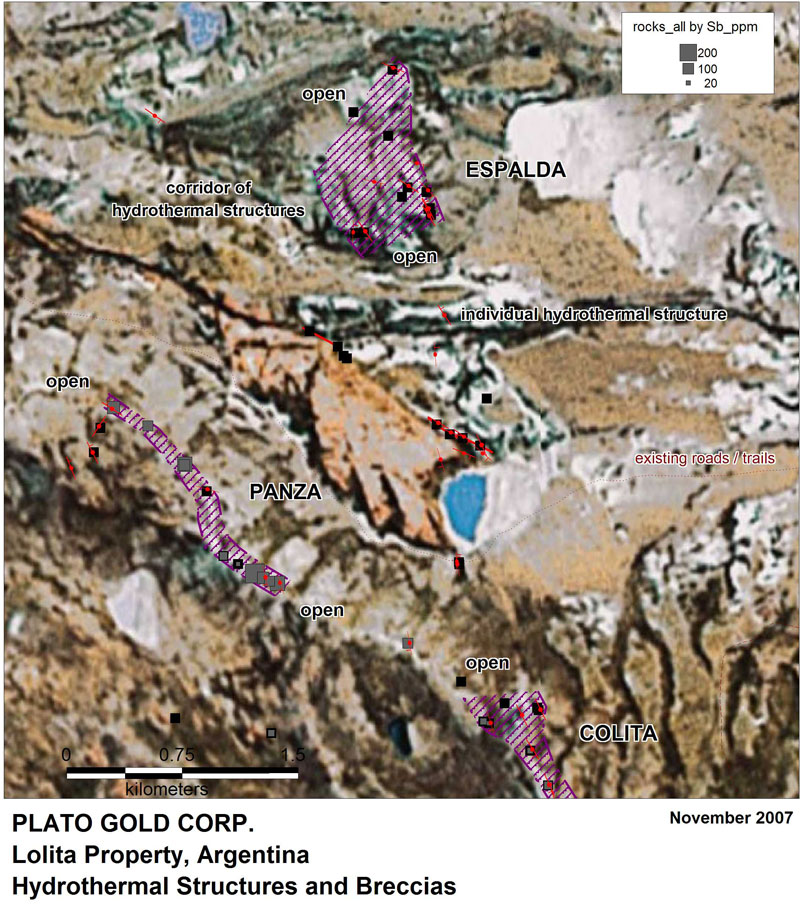