Dr. Rudy Wahl has been prospecting in the Marathon – Hemlo – Terrace Bay area since 1989 and has optioned more than 30 properties to different mining companies. His discoveries represent a diverse range of commodities and deposit types, including gold, uranium, rare earth elements, diamonds and niobium. 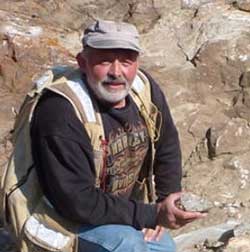 In 2012 the Northwestern Ontario Prospectors Association (NWOPA) presented him with its Lifetime Achievement Award. In 2015 three years later, he received NWOPA’s Bernie Schneiders Discovery of the Year Award for his discovery of up to 1.63 % Nb2O5 and up to 20.6 % P2O5 on the Good Hope Niobium Property in 2014.

Rudy has contributed his time to the sector by organizing conferences, mentoring students, leading field trips, and fostering relationships with First Nations groups. He received an Honorary Doctorate Degree in Science from Lakehead University in Thunder Bay in 2017. A year later, he was elected to NWOPA’s Board of Directors, and in 2019 was elected to Vice President.

Dr. Rudy Wahl will be presented with the PDAC 2020 Bill Dennis Award at the Awards Gala Dinner at the Fairmont Royal York Hotel, during the annual PDAC Convention in Toronto on March 3, 2020.