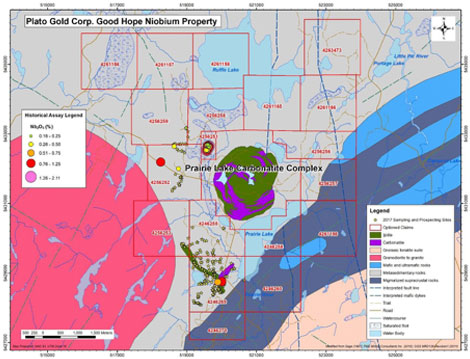 The Good Hope Carbonatite Property is located approximately 45 kilometers northwest of the town of Marathon, 28 km north of Highway 17 and the north shore of Lake Superior, and 70 km northwest of the Hemlo gold mining camp. The property is readily accessible from the Trans-Canada Highway 17 via the Dead Horse Road.

In 2010, prospector Rudy Wahl discovered niobium mineralization on the Good Hope Property when he identified 1.63% Nb2O5 in a small outcrop on site #28 (Figure 2). In 2014, he followed up with mapping and prospecting by digging 5 pits in the area.

The primary niobium (Nb)-bearing mineral in economic deposits is pyrochlore, which has the generalized chemical formula (Na,Ca)2(Nb,Ta,Ti)2O6(OH,F). Pyrochlore is the niobium bearing mineral identified on the Good Hope Property. Microprobe studies have shown that the pyrochlore mineralization on the Good Hope Property has a low content of deleterious elements such thorium and uranium.

Niobium is primarily used by the steel industry to increase strength, toughness, corrosion resistance, as well as reduce the weight of alloy products. Niobium is used by the aerospace industry in nickel-, cobalt, and iron-based super alloys. Niobium-geranium, niobium-tin, and niobium-titanium alloys are used in superconducting magnets for magnetic resonance imaging instruments and in particle accelerators, such as CERN’s Large Hardon Collider.

Several new applications for niobium have recently been identified. In October 2017, Toshiba Corporation announced that it has developed a new titanium niobium oxide anode which has double the capacity of the anode used in their current lithium-ion batteries and could triple the speed of recharging. Niobium may also play a role in the future development of quantum computing.

The niobium market is tightly controlled, with approximately 90% of the current global supply of ferro-niobium coming from Brazil. In 2014, the United States classified ferro-niobium as a ‘Critical and Strategic Material’ authorizing the Department of Defense to stockpile niobium.